Adrienne is a 2013 Kresge Literary Arts Fellow writing science fiction in Detroit. She is the co-editor of the forthcoming anthology Octavia’s Brood: Science Fiction from Social Justice Movements with Walidah Imarisha. She has helped to launch the Octavia Butler and Emergent Strategy Reading Network for people interested in reading Octavia’s work from a political and strategic framework, and is building with Octavia E Butler Legacy Network on other ways of extending Butler’s work.

In terms of writing, Adrienne blogs regularly on this site, and is a contributing editor for YES! magazine.

Adrienne is in Somatics Teacher Training to deepen her healing, doula and facilitation work. In the past few years she has been a facilitator for the Detroit Food Justice Task Force, Detroit Future, and the Detroit Digital Justice Coalition. She is a part of the faculty for the Center for Whole Communities. She also partnered with Engage to facilitate a year-long Community of Practice on Networks and Decentralizing Leadership, 2011-2012.

Adrienne was the executive director of The Ruckus Society from 2006-2010, and sat on their board through 2012. She was also a National Co-Coordinator for the 2010 US Social Forum.

Though she no longer serves on boards, Adrienne is proud to have spent time on the boards of Allied Media Projects, Third Wave Foundation, and Common Fire. 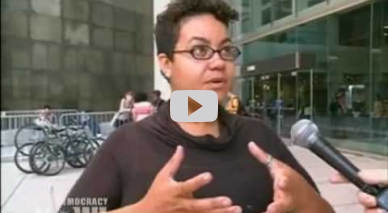 Adrienne Maree Brown on the US Social Forum, Detroit and Octavia Butler